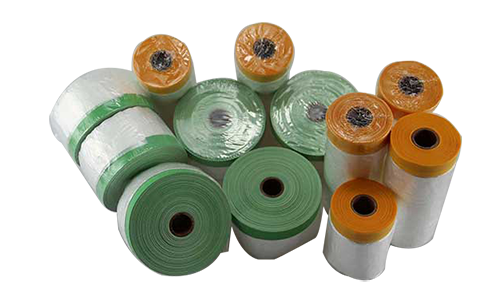 Pre-folded masking film is large widths film will fold down to various widths. The roll width from 24inch to 99inch. The folded volume width does not exceed 13inch. Open the folding layer easily when use masking film in painting job.

Pre-taped masking film was attached the painter’s tape to the edge of your plastic masking film. When you roll along and apply the film to the surfaces you want to protect, which speeds up the prep time and don’t need hand masker dispensers. Hand Masker is a device allow you to load your painter’s tape and your plastic masking film onto the machine which attaches the tape to the edge of your film as as you roll along and apply the film to the surfaces you want to protect, which speeds up the prep time significantly.

House painting masking film for masking cover the indoor painting job. When painting a ceiling, run the adhesive edge along the top of the wall, unfold the film downward, pressing it flat against the wall. Window masking film works great on windows because it sticks well to glass. It will rarely match the exact size of windows.

Cloth taped masking film is a Outdoor maksing film that pretaped with UV resistant cloth tape (Green / Blue). Cloth taped masking film as the drop sheet roll is perfect protection for use in outdoor areas where you want to catch drips and overspray. UV-resistant Cloth Tape is applied along one edge of high-density masking film. The masker has a unique coating which helps create cling to the surface protected – even in windy conditions or with spray applicators.